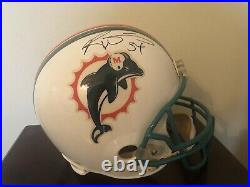 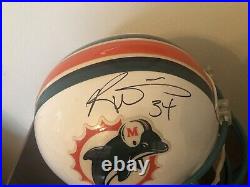 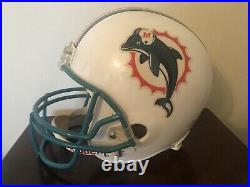 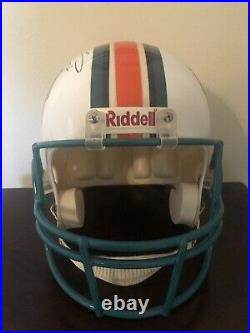 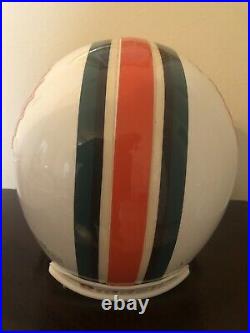 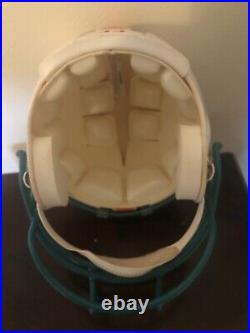 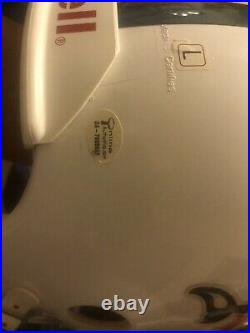 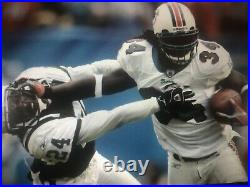 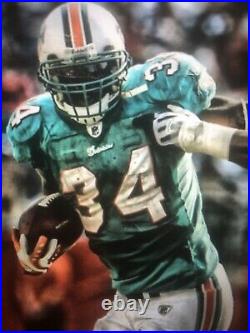 This is a listing for a Ricky Williams Signed Autographed Throwback Miami Dolphins Full Sized Replica Helmet. The helmet is in wonderful shape with no apparent. Scratches, scrapes or blemishes. The helmet has a clear signature from Ricky in black sharpie pen and he has also inscribed his team number, #34. The helmet has an authentication sticker from Online Authentics. The helmet itself, is for display only and is not intended for competitive use. Ricky Williams is a former college and NFL running back linebacker who played 11 seasons in the NFL. In college, Ricky became one of the great running backs in college history while playing for the University of Texas. He was a 2-time Unanimous All-American and Doak Walker Award Winner. In his senior season he broke the then existing college career rushing mark and he won the Heisman Trophy, as well as the Maxwell and Walter Camp Awards and he was named the AP Player of the Year. Ricky was the 5th pick of the 1999 NFL Draft by the New Orleans Saints. The Saints traded all of their draft picks (as well as the next year’s 1st Round and 3rd Round Picks) to move up to draft Ricky. He played in New Orleans through 2001 and he then moved to the Miami Dolphins for the first of three stints with the team. While with the Dolphins, Ricky led NFL in rushing in 2002 and he was named 1st Team All-Pro and he made the Pro Bowl. In his NFL career, Ricky rushed for more than 10,000 yards and had five seasons rushing for more than 1,000 yards. Helmet would make a great gift for any fans of the Dolphins, Longhorns or the NFL. If you have any questions, please let us know. Your satisfaction is always our main priority. This item is in the category “Sports Mem, Cards & Fan Shop\Autographs-Original\Football-NFL\Helmets”. The seller is “sportsfanland” and is located in this country: US. This item can be shipped to United States, Canada, United Kingdom, Denmark, Romania, Slovakia, Bulgaria, Czech Republic, Finland, Hungary, Latvia, Lithuania, Malta, Estonia, Australia, Greece, Portugal, Cyprus, Slovenia, Japan, China, Sweden, Korea, South, Indonesia, Taiwan, South Africa, Thailand, Belgium, France, Hong Kong, Ireland, Netherlands, Poland, Spain, Italy, Germany, Austria, Bahamas, Israel, Mexico, New Zealand, Philippines, Singapore, Switzerland, Norway, Saudi Arabia, United Arab Emirates, Qatar, Kuwait, Bahrain, Croatia, Republic of, Brazil, Chile, Colombia, Costa Rica, Dominican Republic, Panama, Trinidad and Tobago, Guatemala, El Salvador, Honduras, Jamaica, Antigua and Barbuda, Aruba, Belize, Dominica, Grenada, Saint Kitts-Nevis, Saint Lucia, Montserrat, Turks and Caicos Islands, Barbados, Bangladesh, Bermuda, Brunei Darussalam, Bolivia, Ecuador, Egypt, French Guiana, Guernsey, Gibraltar, Guadeloupe, Iceland, Jersey, Jordan, Cambodia, Cayman Islands, Liechtenstein, Sri Lanka, Luxembourg, Monaco, Macau, Martinique, Maldives, Nicaragua, Oman, Peru, Pakistan, Paraguay, Reunion, Vietnam, Uruguay.