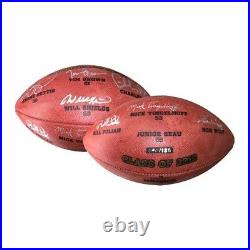 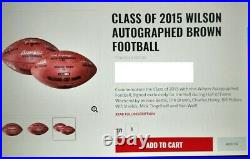 Commemorate the Class of 2015 with this Wilson HOF Autographed Football, Signed exclusively for the Hall during Hall of Fame Weekend by Jerome Bettis “The Bus”, Tim Brown, Charles Haley, Bill Polian, Will Shields, Mick Tingelhoff and Ron Wolf! Junior Seau is listed on this ball but was unfortunately deceased at the time of his induction into the HOF. Limited Edition out of 125 –Pro Football Hall of Fame logo and names and numbers of each member of the Class of 2015 stamped in black. See the pictures of #s 118 & 119 of 125—not many left in the world! Signed by Jerome Bettis, Tim Brown, Charles Haley, Bill Polian, Will Shields, Mick Tingelhoff and Ron Wolf. A better picture of Mick Tingelhoff and Bill Polian’s signature can be taken and sent to you if you would like. Own a piece of history today! This makes a wonderful gift at a reasonable price! This is a unique ball and has 7 from the same inductee class! Contact me for more details. Thank you very much for looking! We do not claim to be, nor are we professional graders. 0.2.5.5.0.0. The item “NFL HOF CLASS OF 2015 AUTOGRAPHED FOOTBALL #d/125-Tim BrownJerome BettisSeau” is in sale since Saturday, December 9, 2017. This item is in the category “Sports Mem, Cards & Fan Shop\Autographs-Original\Football-NFL\Balls”. The seller is “moreforyourmoney2010″ and is located in Iowa City, Iowa. This item can be shipped to United States.